On Anzac Day at Catholic Healthcare, we acknowledge the service of all those residents, clients, employees and their families who have served in our Armed Forces or had loved ones who did. We’re privileged to hear so many of their first-hand accounts of service in war and peacetime, at home and abroad. We’re privileged to care for our older generations, and have the chance to learn first-hand from the living history they share of their wartime experiences here and abroad. Lest we forget.

One such resident is Jean, who lives at Jemalong Residential Village in Forbes. Now in her 90s, Jean was delighted when several Australian Defence Force team members were posted to assist at Jemalong recently by the Federal Government (see main image top of page). For Jean, this brought back memories of her time as a Private in the Australian Women’s Army Service (AWAS) during in World War II. 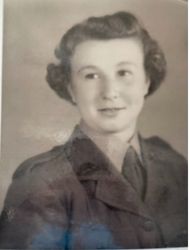 Above: Jean during her time in the AWAS

Jean, who is just two years shy of her 100th birthday, has lived in Forbes all her life.

“I wanted to go on an adventure and also do my part for the war, particularly as a woman,” says Jean. “None of my friends signed up, it was only me.”

The AWAS had been formed in 1941, to capitalise on what the then minister Sir Percy Spender  considered to be an ‘underutilised resource’ in Australia’s war effort – women. Members of the AWAS took on roles such as drivers, provosts, canteen workers, cooks, typists, signallers, and cipher clerks. These pioneering women were among the first to serve in the Australian Defence Forces outside of the medical and nursing field. AWAS members were posted to remote locations such as New Guinea, the Northern Territory, Adelaide River, Katherine, Tennant Creek and Darwin.

Jean’s time in the AWAS began at Ingleburn NSW, where she undertook her rookie training as a search light operator. She was posted to Auburn, followed by Strathfield and later Chester Hill.

“The four week course involved a lot of studying, then most of our physical training was done after dark. Our camp was very close to Duck Creek, so we had mosquito nets over our beds!” says Jean.

“We also had to adapt to sleep during the day as we were working at night.”

After the Japanese bombed Broome in 1942, Jean soon headed to Western Australia. After seven days and eight nights on the ‘troop train’ (with, she says, only one shower during the entire trip!) Jean and a group of 19 others arrived in Perth and were stationed at a camp at Riverstone.

“It was a terrible place, powered by a generator and with sea water for showering!,” recalls Jean. “I was so pleased when we were relocated to Scarborough camp which was much more civilised.”

At Scarborough camp, Jean and the group slept two to a tent and were put on guard duty, armed with 303 rifles. When doing the morning shifts, the women had to ride a donkey so that there would be hot water for showers at night.

In January 1945, the group moved next to Rottnest Island where Jean stayed for four months, before taking home leave and travelling back to Forbes in time for her 21st birthday. “Back at home in Forbes, I was very happy to just be home with mum and dad and my siblings once again,” Jean says.

Jean served the remainder of her army days at Moorebank in the motor transport section, before being discharged in May 1946.

When the war finally came to an end, Jean remembers her group of colleagues travelled to the city together to celebrate. “We had a ball – dancing in the streets and celebrating, it was amazing!”

“I’ll forever remember the great friendships I made while in the AWAS. I truly met so many great girls and really enjoyed my time serving.”